What is a Running Software System?¶ 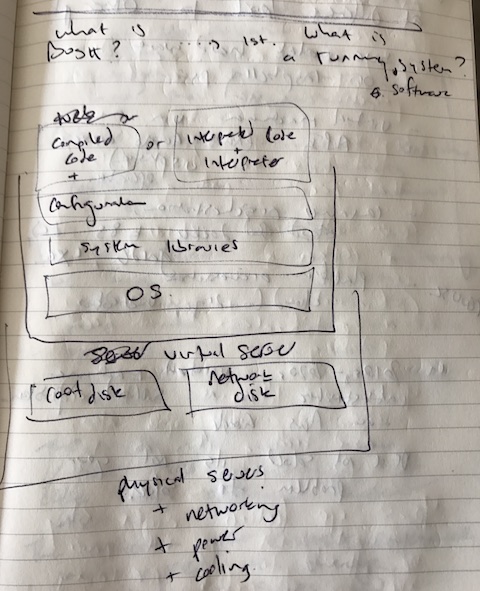 Your bespoke application will be composed of bespoke code plus third party software libraries (RubyGems for Ruby, NPM for Node, Wheels for Python, etc).

Your application will need to be configured (combination of local configuration files, environment variables, service discovery system) to run and connect to any dependent systems.

Your application and its dependencies all require an operating system. And formatted disks. And networking to be configured.

Your applications and databases running on virtual machines will require disks: local or ephemeral disks that might not survive VM downtime or replacement; and persistent networked disks that are independent of each VM and will be available again if you need (or are forced) to replace your VMs.

All of this runs upon physical machines connected to actual storage systems and interconnected by real-world networking.

Choose Your Own Deployment Level¶

You might define "deploying my system" at a different level to other people:

From the perspective of your organization and their goals of efficiently using your time and energy, hopefully you can start as high up this stack as possible. For example, there is simply nothing faster, more time efficient, and UI consistent as cf push-ing an application to any Cloud Foundry. Every system you deploy should have to first justify why it cannot be deployed to Cloud Foundry, Heroku, or Google App Engine.

If you do need to "go down the stack" and take responsibility for more, then you will need more help. Either your organization will need to expect less from you and your team, or you'll need more tooling, automation, and education.

The Ultimate Guide to BOSH assumes you need the latter: you need tooling, automation, and education.

The Ultimate Guide to BOSH assumes you are prepared to learn a new tool, its features, and its quirks.

BOSH slots in very nicely into any continuous deployment systems you might already be using. The bosh command-line tool is a perfect abstraction for, "Please make this happen," that will make it pleasurable to move BOSH deployments into your CI/CD systems.